Android and iOS both now have nascent augmented reality frameworks which brings AR tantalisingly close to lots of peoples' pockets, including mine.

Here are the results of my first foray, in a couple of cold evenings this winter (2017/18).

Getting A Mobile AR App Working In A Single Evening

The first step, which is often troublesome, is getting the right combination of tools, SDKs and components together, configured and running.

I was lucky to hit upon one quick and easy route to get started so here it is for those interested.

Caveat: I'm an Android user which has coloured my decision-making below. I'm 98% certain a similar procedure is available for iOS folks using ARKit.

My First AR Object: A Hole

The demo that comes with ARCore lets you litter your floor with Andy androids, which is nice and all but I wanted to produce something of my own. I settled on the idea of placing a "hole" flush with a surface in the AR scene. My hole would appear like a sunken space inside a real world surface.

Now we know how many holes it takes to fill the Albert hall.

Did you know: computer generated surfaces are often single-sided. One side is visible and the other invisible. When designing a 3D surface, one can decide which direction each face ...erm... faces by giving it a 'normal' pointing outward.

Most computer generated boxes are meant to face out towards the world. We want to show the inside of the box though, so we'll turn it inside out by inverting the normals on each of the box's walls.

To get the inside-out effect in the excellent Blender 3D modeller, you can follow these steps: 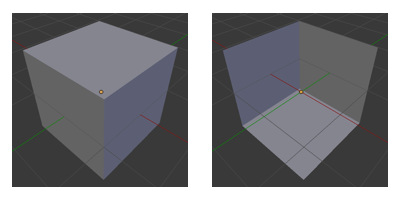 Now we can see the box's insides but we can still see the inside faces when looking at the box from the side. This gives a slightly jarring effect which we'd like to avoid and we also want to sink the box into the ground so it's only visible from directly above.

Step 2. Make It Visible Only From Above

In effect we want to hide the box from the viewer unless they're looking down on it. Modern 3D hardware gives us a way to manage that through so-called "stencil" effects.

Stencilling, in the context of 3D graphics, is the act of masking out a region to single it out for special treatment. With this technique, we can draw 2 objects: a "stencil mask" and a model for the user to view "through" the mask.

To show our inside-out box from above only, we make a second 'proxy' object, just a quadrangle which defines the region in which we can see the box. Then we place our proxy on the top surface of our box.

Unity exposes stencilling features in its shader language which makes it relatively easy to build stencil and materials.

The stencil material is responsible for writing to a "stencil buffer" which is like an image whose pixels can be used in other shaders to show, hide or alter parts of the scene.

Firstly, we want stencil objects to affect normal geometry so we render them first:

We also want stencil objects to write a predefined mask value to the stencil buffer:

Here's a gist with the whole stencil mask shader.

To render an object only where the stencil buffer has a particular value, we can augment an existing shader with an appropriate Stencil clause:

Here's a whole surface shader which honours the stencil buffer.

Now we can create a material using our masked shader for our inside-out box and another for our proxy quad object using the stencil shader. 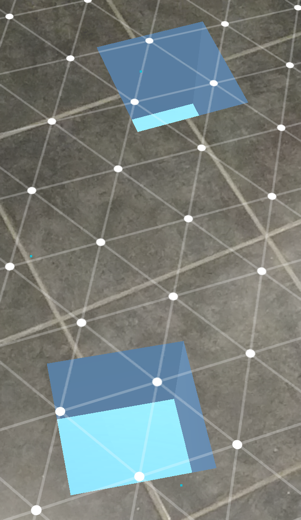 For the interested, here is a Unity package containing a prefab including geometry, materials and shaders.